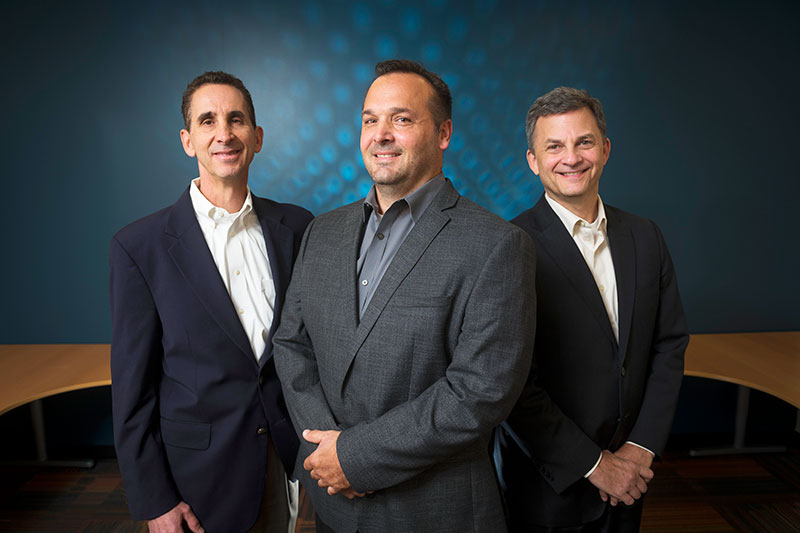 At the Wilmington-based IT company, great work doesn’t come at employees’ expense.

By Michael Bradley for Delaware Today. Published on December 4, 2018.

When Beebe Healthcare had to replace a whopping 160 switches earlier this year in its IT equipment, it could have been an overwhelming process that might just have caused some serious consequences throughout the Lewes-based medical provider’s system. Each switch connects several parts of a network and is responsible for helping significant information—much of it quite sensitive—travel to a variety of key people in the Beebe universe.

If left alone, the IT folks in the system probably could have handled the job. But since they are responsible for the 24/7 operation of the computer network, piling on a significant assignment like switch replacement could have stressed them and led to big problems. So, Beebe called on Wilmington-based Info Solutions to help handle the job. As a result, the only service interruptions came when the actual switches were pulled from their resting places and new ones were inserted. In other words, things went smoothly.

“Our Info Solutions team understands us and is committed to us,” says Brad Travis, Beebe’s technology manager and a 24-year employee of the healthcare system. “They take our business very seriously and personally. It’s not a job for them. It’s what they do and who they are, in a sense.”

Ten years ago, Bill Riley, Mark Olazagasti and Richard Roux formed Info Solutions because they weren’t happy with the directions in which their careers were headed at other tech providers. They bonded over shared business philosophies and the knowledge that the industry was changing. Over the past decade, they have created a company that has flourished, but more importantly, has built a culture that has had positive results for clients and employees alike.

“They take our business very seriously and personally. It’s not a job for them. It’s what they do and who they are, in a sense.” -Brad Travis, technology manager of Beebe Healthcare

Yes, Info Solutions wants to thrive and profit, but it is not solely out to make money. The principals actually admit that they could be more aggressive but choose not to be. The result is that the company not only provides excellent work and service to clients, but has also fostered a flexible work environment that makes staffers want to do right by their customers. Travis is delighted with his relationship with Steve Dolnack and Brian Neary, as well as other Info Solutions people who help Beebe’s tech operations run smoothly.

“The quality of their work is high, and their personalities work well with us,” Travis says.

It’s a fascinating time in the tech world, as rapid innovation, the need for security and the ever-growing relationship between businesses and the cloud force firms to be more vigilant than ever with their systems. Info Solutions operates largely on a project-based model, although it does have some customers for whom it provides ongoing support and service. “Clients take us off the shelf, use us and put us back on the shelf,” says Olazagasti, who handles daily operations, oversees the financials and manages the consultants.

It’s a smart configuration, because it allows the Info Solutions staff to pivot when necessary but also to provide a variety of different clients with attention. Riley admits that the company could have grown “a lot faster” and have more employees than the 15 on the books. However, making sure those who come on board have the “right values and maturity” to provide what Info Solutions gives to clients was vital to keep the firm’s reputation high throughout the industry.

That means the first question Info Solutions personnel ask potential—and current —clients is what they need, rather than trying to push unnecessary services. And those who make first contact with prospective customers are usually the people with whom clients will interact throughout their relationship with Info Solutions.

Do they want a hybrid? We aren’t trying to force-feed a square peg into a round hole.

“Our clients like that approach. It’s nonaggressive sales. They aren’t pressured, and they appreciate it. The individuals they first meet are the individuals they are going to work with throughout the life cycle of a project. It’s not a case of a salesperson passing the client off to a design person who then introduces a project manager. It’s the same people.”

After joining the U.S. Air Force out of high school, Riley took a test designed to discover his aptitude for various tasks within the ranks. Of the five he was deemed qualified to perform, four involved airplane maintenance. One was in communications.

“I thought [communications] would be a better long-term career path,” he says. “I never saw myself as an Air Force lifer.”

During his six years in the USAF, Riley spent some time in Ellsworth, South Dakota, maintaining the cable infrastructure, surge protectors and launch facilities at silos for Minuteman I nuclear missiles. That work helped him learn about computers and related equipment and helped him land a job—after a short stint at another company—with Wilmington-based Info Systems in 1993. He spent 15 years at Info Systems and met Olazagasti and Roux there. In 2005, Connecticut-based MTM Technologies bought Info Systems, and the three men were not happy with what came next.

“[MTM] really mucked the whole thing up,” Roux says. “We took a lot of pride in what we were doing there, but morale suffered and the culture changed.”

Roux and Olazagasti left Info Systems before Riley did, but the three men knew they wanted to work together again. The idea of starting up a shop appealed particularly to Roux, who has been an entrepreneur since he was sharpening skates as a teenager and starting his own sporting goods store while a student at the University of Delaware.

Olazagasti, who spent time with J.P. Morgan in Wilmington as vice president of foreign exchange operations, was particularly interested in providing client service even though his work is on the financial side of the equation.

“We want to add value to clients,” he says. “That’s what drives consultants. We enjoy being advisors and want to help our clients get from point A to point B. That’s in our DNA.”

Travis would certainly agree with that. Dolnack and Neary have worked with Beebe for 16-plus years, making sure the network has continued to run smoothly, troubleshooting any problems that arise, modernizing the equipment and protocols and being available at just about any time.

“They are critically important to us,” Travis says. “They are just like team members. We reach out to them all the time. We couldn’t put a dollar amount on what they mean to us.”

Although Info Solutions does “put a dollar amount” on what its consultants do, it isn’t trying to squeeze every possible penny from its clients. It also isn’t interested in growing into a much larger concern. Riley doesn’t look to the next 10 years as a chance to expand the employee rolls to the 100 mark or bill at $100 million per annum. He would rather keep providing great service and also creating a good environment for those who already work there.

Roux tells the story of calling an Info Solutions consultant midday and finding him asleep. But he didn’t get angry or initiate some disciplinary actions. Because the person had to be in the office at midnight to do something for a client, he was napping.

“We have people come to work for us, and we later hear their spouses say, ‘He’s so much happier since he started at Info Solutions,” Roux says. “We have a balance between getting a lot of work done and putting too much pressure on the people who work here.

“A lot of that comes from empowerment. People aren’t under a microscope here.”

That doesn’t mean the atmosphere is lax. Every client problem is tackled with a careful approach to research, a key part of any business plan. But it’s perhaps even more important in IT, thanks to security issues that dominate the climate and a need to determine just how comfortable a client feels with its information in the cloud.

The resulting solutions are often hybrids that fit each situation, rather than provide a blanket approach.

“Each client is like a snowflake,” Olazagasti says. “But even though they are all different, security remains a top three concern on all lists.”

For 10 years, Info Solutions has made sure it – and all the other client concerns—are handled well.

IT Security for the Hybrid workplace

Ramble in to Work – The New Hybrid Workspace